There is room here for parties of 10 to 56 people in an exciting and historic setting. You can also enjoy an aperitif on the helipad of the destroyer Småland, or beneath the surface of the water aboard the submarine Nordkaparen. Afterwards, a beautiful dinner will be laid out on deck. It is the perfect setup for a delightful evening.

EAT AND DRINK – ASHORE OR ON THE WATER

The food on board is prepared by our chefs, who are happy to listen to your wishes and prefer to work with seasonal ingredients. The officers’ mess aboard the destroyer Småland has space for 22 guests; the harbour ferry Dan Broström can host 56 guests. If your party has more people, we recommend staying ashore and reserving Kajskjul 8, which has room for up to 900 guests.

WE WILL EXCITE YOUR TASTE BUDS AND BRAIN CELLS ALIKE

When planning an event, meeting or small conference aboard one of the boats, we recommend inviting guests to a private guided tour of Maritiman’s vessels. It is a highly appreciated pause. Bring the party up to the dizzying heights of the destroyer Småland’s pilothouse; walk across barges and gangways, and climb down beneath the water on the submarine Nordkaparen. The guides are not only specialists in maritime life; they also know how to adapt the content and language to suit your wishes. 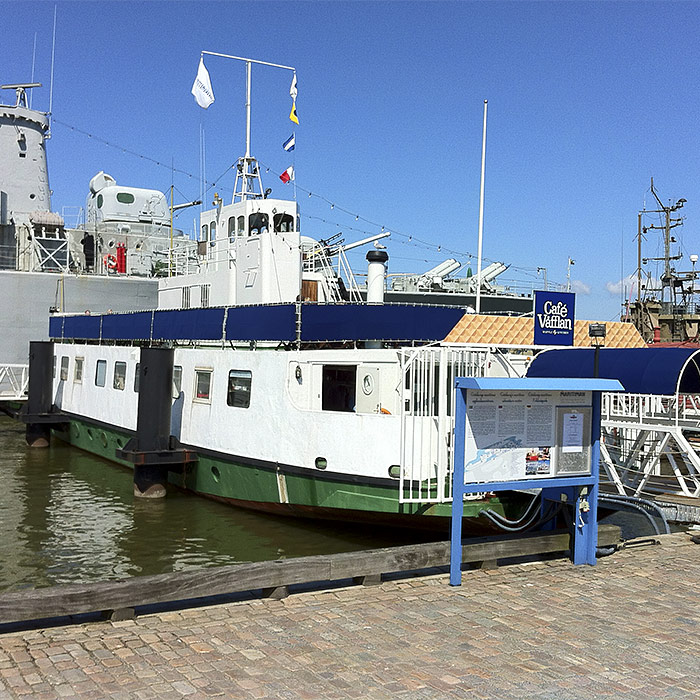 On the harbour ferry Dan Broström, which is used daily as the Matrosen Ferry Kitchen lunch café, we can lay tables for 56 guests. Dan Broström is perfect for small conferences, board meetings and staff dinners, as well as family parties and celebrations with various themes. Why not begin with an underwater drink inside the submarine Nordkaparen, before enjoying dinner aboard?

The harbour ferry Dan Broström was built in 1963 at the Larsson Brothers’ boatyard (Bröderna Larssons Varv) in Kristinehamn and then delivered to the now defunct Göteborgs Hamnstyrelse. She was in use for the line between Rosenlund and Lindholmen until 1990, followed by a few years in which she was used for harbour tours with passengers, until she was purchased by Maritiman in 1994. The ferry was equipped with two Voith Schneider cyclorotors for propulsion, whose individually adjustable blades offered excellent manoeuvring and could replace both propellers and rudders. The ferry is now a lunch café that is also operated by Kajskjul 8. 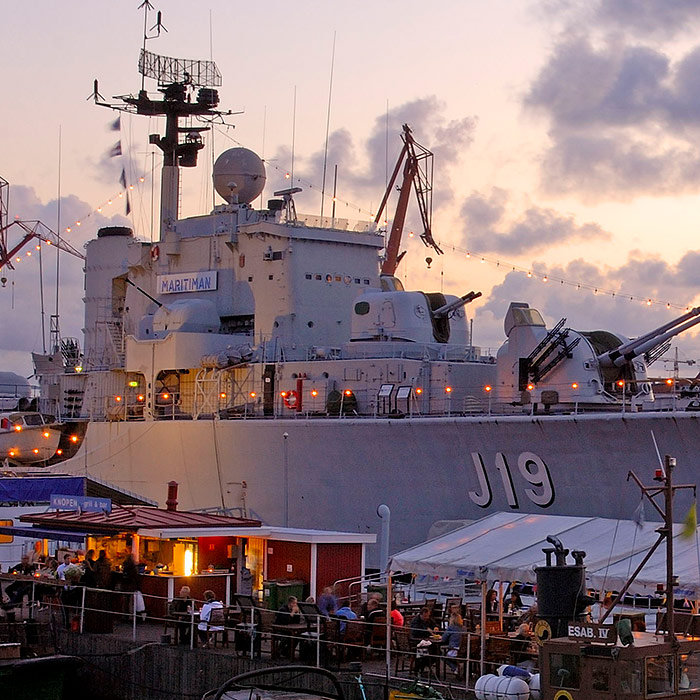 The officers’ mess on the destroyer Småland has space for 22 seated guests. We arrange many different types of events here: wedding dinners, small conferences, kickoffs and board meetings, to name just a few. Many parties choose to begin with a refreshing welcome drink up on Småland’s helipad, followed by dinner in the officers’ mess.

The destroyer Småland is the largest warship preserved at a museum in Scandinavia. She was launched at Eriksberg’s Mechanical Workshop (Eriksbergs Mekaniska Verkstad) in 1952 and delivered to the Swedish Naval Forces in 1956. The destroyer has been modernised three times and was decommissioned in 1979. Upon delivery, she and her sister ship, Halland, which was completed at Götaverken the year before, were the world’s first destroyers with naval missiles. The propulsion machinery comprised two 29,000 hp steam turbines, each of which powered a propeller. The destroyer can be said to be a result of the 50-year development of destroyer weaponry. It had a 272-man peacetime crew. Today, events for smaller parties are held in both the officers’ mess and the boatswains’ mess. 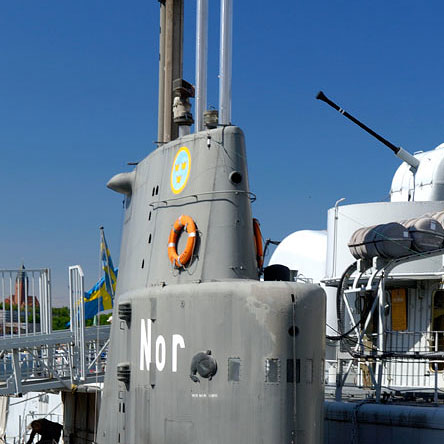 Surprise your guests with a welcome drink beneath the surface of the water on the submarine Nordkaparen. It’s not for landlubbers or claustrophobics – but it is an unforgettable experience for courageous adventurers!

The Draken-class submarine Nordkaparen was built at Kockums Mekaniska Verkstad (Kockum’s Mechanical Workshop) in Malmö with delivery to the Swedish Naval Forces in 1962. She differs from earlier types primarily in the stern, which was streamlined and equipped with a cross rudder. Nordkaparen was also fitted with a large, slow propeller, for quieter movement compared with earlier double propellers. She was also equipped with a system for wire-guided torpedoes, which were stored in a revolver warehouse that simplified and reduced the time to reload the torpedo tubes. The submarine was also equipped with a torpedo crane on the foredeck in order to salvage practice torpedoes.